An officer of the Ghana Police Service, Lance Corporal Bright Akosa has been arrested for his alleged involvement in robbery activities.

The officer enlisted into the service in 2012 was initially assigned to the SWAT unit but has been attached to the Formed Police Unit (FPU) in Accra for the past two years.

Officer Okosa is alleged to be an integral member of a robbery and car snatching syndicate terrorizing people within the Greater Accra and the Central Regions.

He is said to have been arrested alongside a civilian accomplice, Francis Aidoo on the morning of Tuesday, September 15, 2020, at Elmina in the Central Region by police personnel from Accra.

The two have since been handed over to the Anti-Robbery Unit of the Criminal Investigations Department Headquarters’ in Accra for further investigation.

Daily Guide in it report on September 17, 2020, stated that Lance Corporal Akosa prior to his arrest had been on the police wanted list over a period of time for his involvement in a series of robberies, mostly car snatching.

According to the report, officer Akosa and his accomplice, Francis Aidoo had put up for sale a Nissan Versa Taxi with registration GW 6818 – 20 which they had snatched from its owner in Accra and had transported to Elmina.

On Tuesday, the police on receiving intelligence of the sale feigned interest in the transaction to lure the suspects. 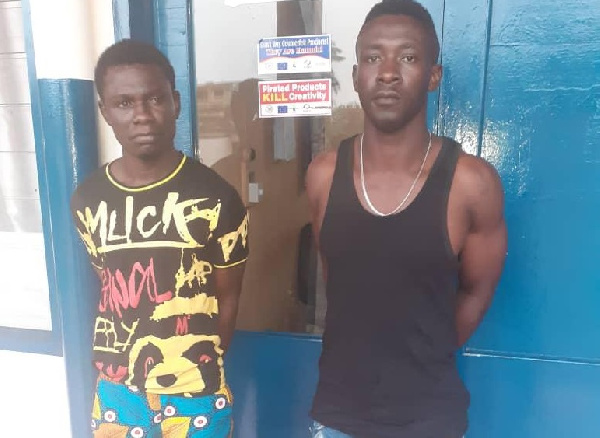 “Plain clothes personnel who were dispatched for the said operation arrested the suspect in the course of the transaction and sent him to Accra for investigation to commence,” Daily Guide quoted its source.

According to the source, the suspects agreed on a price of GH¢8,500 with an undercover CID officer for the vehicle.

The two were then arrested around 7:00 am in the process of the transaction.

A search conducted on the suspects at the time of arrest resulted in the discovery of items including of a foreign pistol loaded with eight rounds of live ammunition, a police ID card, voters’ ID card, GCB Visa card, Bank of Africa Visa card, National Identification ID card (Ghana Card), all bearing the name of the police officer and an iPhone 7 Plus.

In addition, some quantity of dried leaves suspected to be narcotics, a lighter, and a black mobile phone were recovered on the second suspect, Francis Aidoo.

Speciallady Awareness Donates To Over 1,000 Students And Women In 5 Communities (Photos)

Release: Shatta Wale & Other Members of The Team Are Doing Well In Ankaful Prison – SM Mgt