The Black Satellites of Ghana have secured their place in the semi-finals after beating Cameroon 4-2 on penalties. 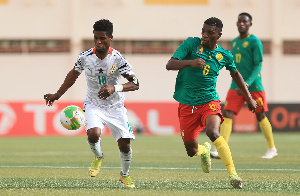 The Black Satellites of Ghana are heading to the semi-finals

The Black Satellites of Ghana have secured their place in the semi-finals after beating Cameroon 4-2 on penalties.

Cameroon started the game with more drive, creating some chances.

The Black Satellites suffered to get the ball forward due to poor touches and passing on the day.

They could only test the opposition goalkeeper from free-kicks and Barnie mistimed his chance to put the side in the lead.

In the second half, the two teams pushed forward for a lead but it was to no avail.

Cameroon drew first blood in extra time through Kevin-Prince Milla in the 103rd minute and Ghana equalised a minute later through Frank Boateng.

Ghana have now qualified to the semi final